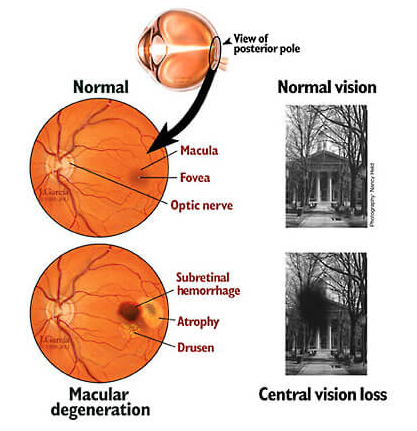 Age-Related Macular Degeneration (AMD) is the leading cause of irreversible vision loss in the United States, affecting nearly two million people, according to the American Academy of Ophthalmology. With the aging population in America, this number is estimated to double in the coming two decades. AMD is a disease in the eye that affects the retina, which is a layer of nerve cells in the back of the eye that senses light and sends signals to the brain so a person can see. AMD occurs when a specific part of the retina called the macular is damaged, causing a person to lose their central vision. With AMD, while your peripheral vision remains intact and normal, you cannot see fine details, regardless of whether you are looking at an object from a distance or close up. 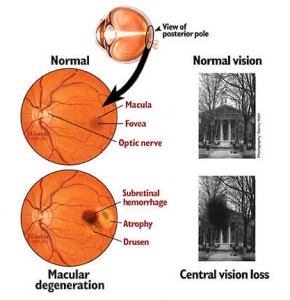 There are two forms of AMD: wet and dry. Dry AMD is common, affecting approximately 80% of AMD patients. Dry AMD occurs when the macula thins due to age and bits of protein called drusen begin to grow. While less common, wet AMD is the more serious of the two conditions, causing faster vision loss. Wet AMD occurs when abnormal blood vessels grow under the retina and cause scarring of the macula. Although there is currently no cure for AMD, wet AMD can be treated with injections, while there is no treatment option for dry AMD.

Finding a cure for AMD remains a major focus of researchers and clinicians at the University of Pittsburgh School of Medicine. Several major research initiatives are underway, including one by Debasish Sinha, PhD. Dr. Sinha and his team have learned that AMD develops because of abnormal activity of a set of white blood cells called neutrophils. This new and exciting discovery led Dr. Sinha and his team to learn that abnormalities in an inflammatory pathway in the eye play a role in the transformation of retina and RPE Cells.  Researchers are now beginning to test treatment in animal models which they hope can someday be used to treat, or possibly even reverse, the effects of macular degeneration. Along with new, cutting edge advanced imaging equipment to obtain earlier diagnosis, these are just two of many exciting examples of the research taking place in Pittsburgh for macular degeneration. Other initiatives using prosthetics, stem cells, and gene therapies are aimed at regenerating the retina, and in a way “turning back the clock” on AMD, potentially enhancing or perhaps even restoring a person’s vision

With continued support from the Eye & Ear Foundation and its donors, the Department of Ophthalmology will be able to build upon this groundbreaking research and move even closer to solving this devastating condition.

Help us turn back the clock on Age-Related Macular Degeneration by donating today.