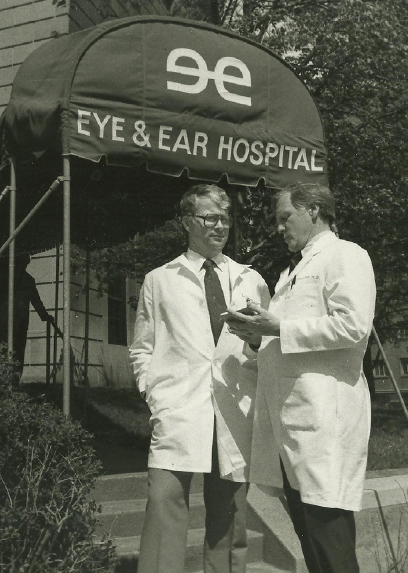 It is rare today to have a 60-year commitment to anything. For Margaret and William Barati, two of their most important relationships have lasted over 60 years – first, their marriage, which is now in its 66th year, and second, their relationship with the Department of Ophthalmology at the University of Pittsburgh and UPMC Eye Center, which began 63 years ago when their infant daughter, Diane, born with cataracts started treatment.

Mr. and Mrs. Barati first brought Diane to Eye and Ear Hospital on New Year’s Eve when she was three months old to have her eyes examined by the late Joseph Novak, MD. Dr. Novak realized very quickly that Diane needed surgery that could only be performed on an infant at one place – Johns Hopkins Hospital in Baltimore. Dr. Novak reached out to a medical colleague at Hopkins to help facilitate Diane’s surgery and care.  Following her successful surgery, Diane was treated in Pittsburgh by Dr. Novak for the rest of his career. In fact, they developed a very close bond, which included Dr. Novak calling and writing Diane to encourage her as she left for college and, then, as she entered the workforce.  This encouragement allowed Diane to thrive and succeed in not only her professional life but also in her favorite hobbies, including classical music, as she plays several instruments, including the flute.

As Mr. and Mrs. Barati were considering their estate and bequest plans, they wanted to support organizations that had helped their family during their long marriage.  At the top of their list was the Eye & Ear Foundation, the fundraising support organization for the Department of Ophthalmology at the University of Pittsburgh School of Medicine. After an in-depth discussion with the Foundation, Mr. and Mrs. Barati made the decision to fund the Barati Family Faculty Award in Ophthalmology, which will allow clinicians and researchers in the Department to engage in targeted, impactful research for macular degeneration and glaucoma, under the direction of José-Alain Sahel, MD, Chairman of the Department of Ophthalmology. Through a combination of funds that will become available upon their passing, Mr. and Mrs. Barati will make the Barati Family Faculty Award, the first of its kind, a reality. “We have always done everything as a team, so we made the decision to support the Eye & Ear Foundation as a team,” stated Mr. Barati following the signing of the documents for the Award.

The Eye & Ear Foundation is grateful that the Barati Family has included them in their estate plans. “It has been an absolute delight working with Mr. and Mrs. Barati over the summer to develop these plans. Much of the credit goes to Diane as she was so encouraging of this idea with her parents straight out of the gate,” states Heather Chronis Danek, Director of Development. Named awards such as these can be funded through a variety of methods, including stock transfers, outright donations, and, of course, estate bequests. In addition, individually designed bequest plans can be developed by the Eye & Ear Foundation that are reflective of a donor’s interest.