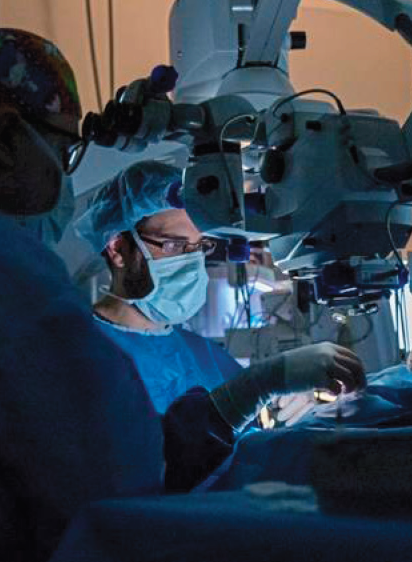 Scientists and clinicians in the Department of Ophthalmology at the University of Pittsburgh School of Medicine had the distinction in January 2020 of implanting the first patient in the United States with the PRIMA System. This procedure is part of a clinical trial that aims to restore partial vision to advanced age-related macular degeneration (AMD) patients.

“This is an important milestone for vision restoration,” says Joseph Martel, MD. “This device has the potential to impact patients with advanced AMD associated visual impairment, for which there is currently no satisfactory FDA approved treatment.”

AMD is an eye disease that occurs when a part of the retina called the macular is damaged. Patients with AMD lose their eyesight in the center of their field of vision while retaining peripheral vision. AMD currently affects more than 11 million people in the United States and is expected to double by 2050 as the U.S. population continues to age.

The PRIMA system consists of a small, wireless photovoltaic chip that is surgically placed under the degenerated macula and a pair of augmented reality glasses that include a built-in camera and infrared projector. Once in place, the chip and glasses work together to convert infrared light from the glasses into electrical signals that are carried by the intact retinal neural network to the optic nerve and then to the brain. After being implanted with the device, patients undergo intense vision training and rehabilitation to learn how to interpret these electric signals and, in conjunction with their limited remaining natural vision, integrate the visual input from the prosthetic vision. PRIMA was developed by Pixium Vision in collaboration with the inventor of the patent, Daniel Palanker, from Stanford and the teams of the Institut de la Vision, led by Dr. José-Alain Sahel.

With the first patient having been implanted in January, doctors are anxious to increase clinical trial participants and follow their progress. “Currently, two subjects have been implanted and have had no serious study-related adverse side effects to date,” states Dr. Martel, an Assistant Professor of Ophthalmology, Retina and Vitreous Services. “At this point, patients have perceived visual sensitivity and bar orientation in the former central scotoma without loss of residual natural acuity, and we are planning further testing of prosthetic vision, including letter recognition and acuity.”

This trial is running concurrently with the first-in-human trial in France, where patients have already begun to demonstrate the ability to identify sequences of letters and numbers. Dr. Martel believes that the University of Pittsburgh and UPMC implanting the first U.S. patient is an important signal that Pittsburgh is fast becoming an international leader in vision research and care. “It demonstrates our capability and motivation to be leaders in vision restoration for blindness. Dr. José-Alain Sahel, Chairman of the Department Ophthalmology and the Exceptional Class Professor at the Sorbonne University in Paris, has an unparalleled record of propelling both people and institutions to success, which enables a culture of innovation, partnership, and results necessary to carry out this important milestone and others to come,” explains Dr. Martel.

For more details on the clinical trial or to support the research conducted in the Department of Ophthalmology at the University of Pittsburgh School of Medicine, please visit eyeandear.org.