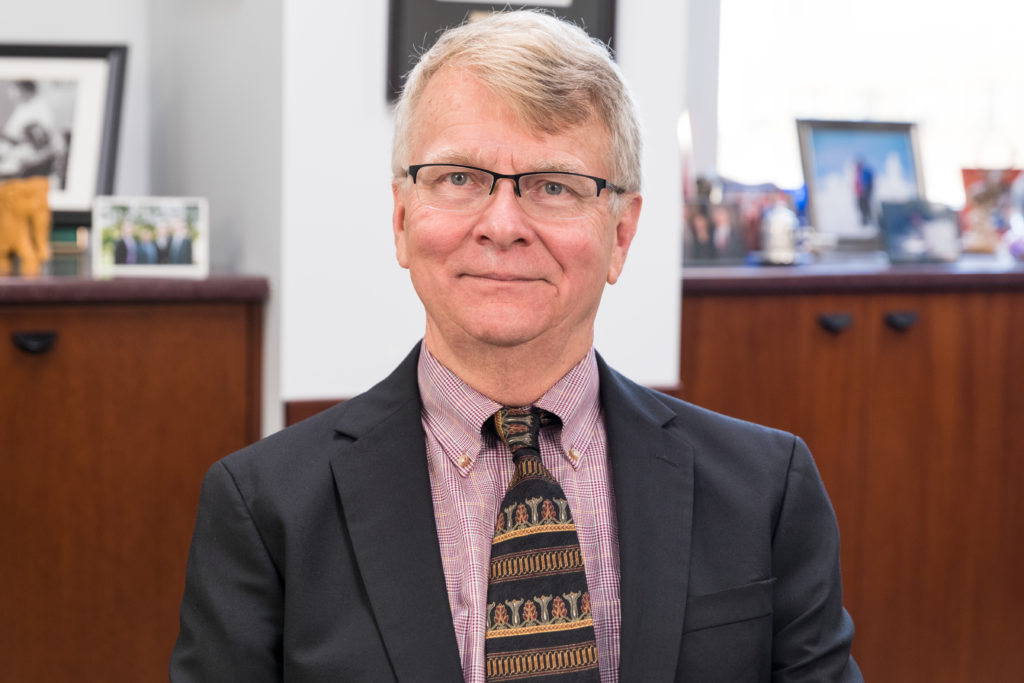 After 42 years at the University of Pittsburgh, 16 of which were as Chairman of the Department of Otolaryngology, Dr. Jonas T. Johnson is stepping down. But make no mistake, he’s not retiring. If anything, he’s reinventing himself.

As much as he has loved being in the operating room, where he has helped patients and trained the next generation of physicians, Dr. Johnson felt an obligation to step down.

Once his successor is named, Dr. Johnson plans to focus on helping run the UPMC Head & Neck Cancer Survivorship Clinic, where he hopes to raise awareness and understanding about survivorship among his colleagues and treat patient side effects more effectively.

“Dr. Johnson would not necessarily say this, but his legacy will certainly be his patients, who have expressed directly to us at the Foundation their admiration and appreciation for him,” says Eye & Ear Foundation CEO Lawton Snyder. “He connects with them directly, and they appreciate him for those human qualities.”

Snyder also cites the many physicians Dr. Johnson has trained over the years,  as well as his and the Department’s numerous accomplishments as part of his “incredible legacy.” He truly exemplifies what a chairman can and needs to do, he adds.

That legacy includes a career spent on the care of people with head and neck tumors, a rank of Distinguished Service Professor at the University of Pittsburgh School of Medicine, and joint appointments in the Department of Radiation Oncology, Department of Oral and Maxillofacial Surgery at the University of Pittsburgh School of Dental Medicine and Department of Communication Science and Disorders in the School of Health and Rehabilitative Sciences. Dr. Johnson is also a Past President of the American Academy of Otolaryngology-Head and Neck Surgery (2003), the American Head and Neck Society (2004), and the Triologic Society (2014).

“What I truly enjoyed was being able to practice medicine in this environment of research and education,” says Dr. Johnson.

Near and dear to his heart is the Survivorship Clinic, initiated when he was approached in 2015 by Dr. Marci Nielsen, a postdoctoral candidate at the time. She asked if she could join him in the Clinic to recruit patients for a research project. Through this, Dr. Johnson learned that patient care was inadequate, and a more comprehensive standard of care was needed with long-term follow-up care.

In the years since the Clinic has grown, it now includes surveillance (checking people for recurrence), prevention, assessment, and help in navigating the health system.

“The first thing I’ve done is try to help people understand what was missed and how there’s this huge opportunity to do better in the future,” says Dr. Johnson.

Dr. Johnson is also passionate about health literacy or helping patients understand what is happening. He is also concerned about the burden of the caregiver and financial toxicity. With three million data points, Dr. Johnson has the perfect ammunition to educate other doctors, who he says, love data.

And now, after participating in several chairman searches in other departments, Dr. Johnson is helping with his own.

“It is my enduring belief that the key aspect of outstanding organizations is successful succession,” Dr. Johnson says. “I believe that my successor will be better than me, and I fully want that to happen. They’ll have all these new things to work on that will make the future brighter than the past.”