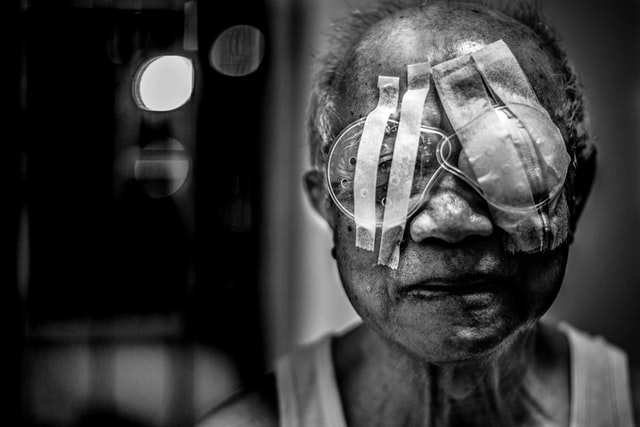 Summer is known as trauma season, when sports and outdoor activities result in an influx of injuries. The eye is especially vulnerable. Consider all the sports with balls that can hit the eye. Then there are risks from BB guns, mechanical work, weed whacking, and other sources of trauma.

“I can’t imagine there’s anything that one could do to the eye that’s an accident or injury that we haven’t seen already,” said Andrew W. Eller, MD, in the July 11 webinar, “Eye Injuries: A Tale of Fireworks, Paint Balls, and Bungee Cords,” hosted by the Eye & Ear Foundation. The Professor of Ophthalmology at the University of Pittsburgh who specializes in retina and vitreous diseases is also the Director of the Ocular Trauma Service and a member of the Retina Service.

That is because the UPMC Eye Center is the ophthalmology trauma center for all of Western Pennsylvania as well as parts of West Virginia, Maryland, and Ohio.

Before discussing eye trauma, two people deserve recognition, Dr. Eller said. The first, Joseph F. Novak, MD, was an ophthalmologist for U.S. Steel. In the late 1940s, he saw up to 400 workers a month. In the early 1950s, he studied 300 different jobs at Duquesne Works and subsequently developed an Eye Protection Program that was initially blocked by management and unions. Dr. Novak showed that eye injuries cost $250,000 in production and wages. He designed eyeglasses with side shields that were made mandatory for workers. This reduced disabling eye injuries by 81 percent. By 1980, there were none.

The second key figure is Harvey Thorpe, MD, who was Chief of Ophthalmology at UPMC Montefiore and a professor at Pitt. He was also a pioneer in surgery for intraocular foreign bodies (FB), developing an ophthalmic endoscope in 1934 to see small foreign bodies in the eye.

This kind of trauma includes:

Corneal abrasion is a very common injury that can happen by getting something in the eye. It can be incredibly painful because the corneal nerves are so sensitive. In most cases, it can be managed by putting a bandage contact lens on the eye to cover the nerves and allow the surface to heal.

Iridodialysis is disinsertion of the iris. It can be sutured back to the wall of the eye. With a lot of work, it can be made to look “pretty good.”

Hyphema – This is when there is blood in the anterior chamber. It usually clears. The risk is that eye pressure can get extremely high from this type of injury, and people can go blind.

Lens Dislocation – This can happen with natural or implant lens. The lens of the eye is held in position with tiny fibers. A blunt-type injury can break these fibers, causing the lens to slip out of place. If an implant lens slips out of place, it can be repaired by suturing back into place. If the cataract has totally slipped, it has to be removed and an implant placed.

Choroidal Rupture – This is not routine and is when the Brooks membrane and choroid split. Depending on where the split is, it can profoundly affect vision, or only a little.

Retinitis Sclopeteria – Often, this comes from a BB gun pellet that hits the wall of the eye and injures some internal layers of the eye without rupturing the eye itself. It is not uncommon, particularly in summer with kids out of school, but can have devastating effects.

Traumatic Optic Neuropathy – This is when the optic nerve is affected by blood trauma. It can cause profound vision loss. “One of the aspects we’re researching is optic nerve regeneration,” Dr. Eller said. “It’s a very exciting field and we’re hoping that through some of the research, we will learn how to regenerate or protect the optic nerve from injury.”

Scleral Rupture – When the impact on the eye is so profound that the wall actually ruptures.

Lacerations of the Eye – When the eye is cut by a sharp instrument or piece of metal. Usually it occurs in straight lines that have to be sutured with extremely fine stitches.

Scleral Laceration – When the split in the eye is visible, with some contents of the eye coming out. Eyes that have this type of devastating trauma can be saved, though ideally the patient is in the operating room within 24 hours.

Intraocular Foreign Bodies – Usually occurs from hitting metal on metal, like hammering a piece of metal and shattering it, causing a piece to get in the eye. This is seen in mechanics or people chopping down trees. This kind of injury reinforces the importance of wearing good eye protection when doing anything with power tools, saws, or weed whackers. Many times, it is not hard to remove; a magnet is used to retrieve the metal and the hole is sealed with a laser. These eyes can do very well. The important thing is getting to the eye quickly, because generally metal is not sterile, raising the risk of eye infections. If the metal is not taken out, rust can damage the retina by creating toxicity. This can occur over a period of years.

S. Tonya Stefko, MD, Professor of Ophthalmology, Otolaryngology, and Neurological Surgery at the University of Pittsburgh and Director of the Oculoplastic, Aesthetic and Reconstructive Surgery Service at UPMC Eye Center and part of the Center for Cranial Base Surgery at UPMC, described her job as being sort of a “near the eye doctor.” She works on the area around the eye socket or orbit.

The eye socket is made up of seven bones which protect the eye. They act like the walls of a house, so things that hit the face and are headed toward the eye or brain will have the shock taken by the bones before anything else.

Dr. Stefko shared several patient stories (and graphic photos) to illustrate the range of eye trauma and how each was treated. The best way to look at the bones of the eye is via a CAT scan. In the case of someone with an orbital roof fracture, the very top of the orbit where the brain sits eye sits above the eye was broken.

In another instance, the patient could not open his eye, and neither could the doctor, because his eyelid was stuck to his eye. This patient was at a 4th of July party in 2021 when someone lit firecrackers. He felt something hit his eye, but it did not really hurt, so he gave it little thought. The next day, his eye was irritated, so he went to urgent care. They gave him some ointment. When he was taken to the operating room after being seen by Dr. Stefko, she found metal fragments stuck under his eyelid that had also destroyed the front of his cornea, the clear surface of the eye. The chemicals from the fireworks had remained in his eye for three days, causing a severe chemical injury.

This patient had four more operations and is now waiting to have a stem cell transplant from the other eye with a cornea specialist.

If there is pressure on the eye or one of the eye muscles from a fracture (also known as an ocular cardiac reflex), it is very important to undergo repair immediately. Glaucoma is a long-term risk in all cases of ocular trauma. As Dr. Stefko said, “Anyone who has been hit hard enough in the eye to say ‘Ouch!’ should have their eye pressure checked every single year.”

EEF CEO Lawton Snyder summed up one takeaway from this presentation: “Our mothers are always right. We should not jump on the bed, run with sharp objects, or play with fireworks.”

UPMC has developed an amazing system for referrals throughout the tri-state area, Dr. Eller said. If someone calls from a more remote location, they can be accepted and transferred. “Unless someone sits at home ignoring the injury, they can get to us pretty quickly,” he said.

Dr. Stefko pointed out that people tend to get infections – especially with open globe injuries – in about 24 hours. So, if they can get in the operating room before 24 hours to have surgery, then the prognosis is good. “It’s not 20 minutes, it’s a day,” she said. “So don’t give up.”

It is important to note that many times, regular emergency rooms and urgent care centers are not adequately prepared to handle eye injuries, Dr. Eller said. “If patients come to us directly, we have an ophthalmologist on call 24/7 and in-house. Patients can get better attention.”

The ophthalmology team indeed will do what they can to save your eye and improve quality of life. Most important: Do not sit on an eye injury. “I truly wish that the 21-year-old from last July 4th had come to us first,” Dr. Stefko said.