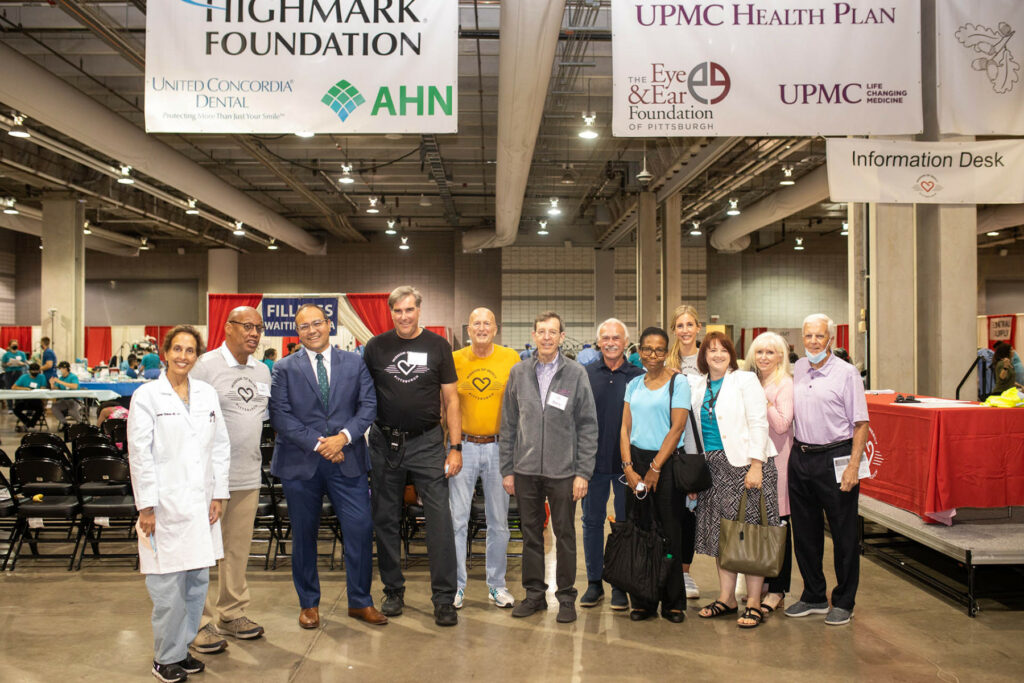 Kim Armbruster had heard a little about the Mission of Mercy Pittsburgh free dental clinics over the past couple of years but had not been to one. This year, she happened to be walking downtown when she saw a big red ad for the Mission of Mercy 2022 event on a bus stop shelter. It mentioned the addition of hearing and vision clinics. The words “hearing aids” caught her attention and propelled her to attend.

At the free hearing clinic, Armbruster was outfitted with her first pair of hearing aids, which brought tears to her eyes. Days later, she was still in shock. “I was at the point in my life where I just accepted that I would keep on living with poor hearing and that I had to let go of missing opportunities,” she shared. “I will no longer be embarrassed to keep asking others to repeat themselves or to keep asking to turn up the volume. No more will I need to smile and nod my head or shrug my shoulders.”

Armbruster was one of 417 individuals who had hearing tests and 229 who received hearing aids at the two-day event held August 5-6, 2022, at the David L. Lawrence Convention Center. For the first time in its six-year history, Mission of Mercy Pittsburgh had three clinics: dental, vision, and hearing. Over 1,465 patients received free quality care courtesy of 1,155 volunteers at the successful event.

The vision team set out to double the number of people they treated last year, when they prescribed glasses for roughly 250 people. The team exceeded all expectations and nearly tripled the number of people cared for, at a total of 736, said Jake Waxman, MD, PhD, Director of UPMC Eye Center Mercy and Comprehensive Eye Service at the University of Pittsburgh School of Medicine, who coordinated the Vision Clinic with Ophthalmology Chair Dr. José Alain-Sahel. Of that group, 700 received free pairs of glasses, including children.

The UPMC Eye Center teamed up with Vision to Learn, Pittsburgh Ophthalmology Society, and Western PA Optometric Society in a never-before-seen collaboration of eye care professionals giving back to the community. Dr. Waxman described the team of PittMed students who choreographed the flow of patients and over 90 volunteers a “dazzling display of controlled chaos.”

Many volunteers went above and beyond. One gentleman who worked in construction came in for a vision screening, complaining about something irritating his eye. Richard Bowers, MD, used a slit lamp to view and remove the sliver. He then reached into his own pocket to give the man money to purchase antibiotics.

This being the first year offering hearing services, the expectation was that about 150 people would be seen, said Catherine Palmer, PhD, Professor in the Departments of Communication Science & Disorders and Otolaryngology at the University of Pittsburgh, and Director of Audiology for the UPMC Integrated Health System. The team calculated how much time they felt hearing testing and hearing aid fitting would take and felt that was the number they would be able to see given the time constraints.

Reality, however, was another story. “We underestimated the number of people who would come and get hearing care,” Dr. Palmer said. “I also underestimated just how efficient our volunteers would be in testing and providing treatment – they were amazing!” Luckily, industry partner Starkey was able to overnight another shipment of hearing aids to arrive early Saturday morning, so more individuals could receive amplification.

The 40 volunteer slots at the hearing clinic were filled by UPMC audiologists and audiology assistants, community and VA audiologists and audiologist assistants, Pitt faculty, undergraduate and graduate students, and friends of hearing. Dr. Elaine Mormer from the University of Pittsburgh and Drs. Lori Zitelli and Ginny Milne from UPMC (also adjunct faculty at Pitt) were critical to the organization and success. The Birmingham Free Clinic and Catholic Charities – which help provide care year-round – will see Mission of Mercy patients for follow-up care and free batteries.

The demand was so great at the two-day event that doors had to close early. “It is frightening to see how much need is out there,” said Lawton Snyder, Chief Executive Officer of the Eye & Ear Foundation, which was one of the event sponsors.

One impressive thing about the event is just because the care is free does not mean diminished quality. One gentleman came in for a hearing test but was not sure if he was going to wait as he was in extreme pain from his tooth extraction. His hearing test was expedited, for which he was incredibly thankful. He said he was a retired police officer who – despite having insurance throughout the years and receiving dental, vision, and hearing care in the past – had never received care as great as what he got at Mission of Mercy.

Keith Young, Chairman of A Call to Care and sponsor of the event, said there were countless heartwarming stories from patients and volunteers about Mission of Mercy’s impact. The most frequently heard comment was that of true gratitude. “I cannot count the number of times I personally heard that, nor can I count the number of times volunteers (and our planning team) talked about the amazing level of appreciation from both patients and volunteers,” he added.