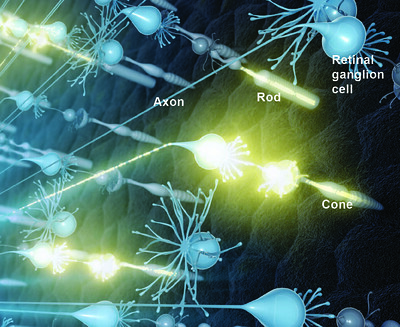 The Department of Ophthalmology at the University of Pittsburgh School of Medicine was the first in the world to use optogenetics to restore vision. The Eye & Ear Foundation’s August 12th webinar covered the Department’s current research in this area.

The presentation began with Joseph Martel, MD, Assistant Professor at the University of Pittsburgh — who specializes in vitreoretinal surgery and diseases – explaining basic retinal anatomy and retinal degeneration. He is the principal investigator for the Feasibility Study of Compensation for Blindness with the PRIMA System in Patients with Dry Age-Related Macular Degeneration Study, a visual compensation system involving a novel miniaturized and totally wireless sub-retinal implant and PIONEER, an optogenetic treatment for visual restoration.

Primary ocular structures include the following:

There are two main types of photoreceptors: cones and rods. Cones got their name because their outer segments are more conical. While residing throughout the retina, they are highly concentrated in the center of the macula in an area called the fovea. Cones are responsible for fine details and color vision.

In the peripheral retina is a higher concentration of slender rod-shaped photoreceptors. They do not really provide much spatial visual acuity but help with lower light conditions and visual perceptions.

Other types of retinal degenerations like retinitis pigmentosa (RP) start with a peripheral vision loss. In later stages of the degenerative process, there is loss of the macular photoreceptors, which causes a center vision and visual acuity in addition to loss of peripheral vision. RP can result in complete blindness in some patients.

The main issue with retinal degenerations is that the retina lacks regenerative capacity, Dr. Martel said. But depending on the basis for the degeneration, there are many vision therapy approaches to try to improve the patient’s functioning.

“The issue is that these devices don’t improve the retina; they just get the visual function to be optimized,” Dr. Martel said. “When you have very severe loss of vision, these types of therapies don’t help much at all. We would want to employ a strategy that would have some vision restoration capability.”

RP is a family of diseases where there is an inherited glitch in a specific gene that causes a more accelerated degeneration of the photoreceptors, or the cells that help support them. There are a multitude of genetic defects (+70) that can cause this type of problem.

RP starts with loss of peripheral vision but is one of those diseases that can greatly impact patients’ ability to see as it progresses.

Dr. Martel asked, “Can we bring back some vision, either artificially, try to regenerate the retina, or halt the progression of degeneration?”

Gene therapy is becoming a reality. Now we have the first FDA-approved gene therapy for a very specific type of RP that involves the RPE65 gene.

Leah Byrne, PhD, Assistant Professor of Ophthalmology at the University of Pittsburgh School of Medicine is Principal Investigator of the Byrne Lab, which is creating new gene therapies for retinal disease.

Dr. Byrne defined gene therapy as a medical approach that treats disease by transferring a therapeutic gene into the retina.

The most common approach is using a nonpathogenic virus, really just a vehicle for carrying a gene into the retina. The therapeutic gene is packaged into a virus, which is then injected into the eye. Then the virus carrying the gene therapy with it has a chance to interact with cells in the retina. The gene that is packaged inside the virus is carried into the nucleus of a cell where it is then transcribed into a healthy protein that has a healthy action for the cell.

“Viruses for good reason have gotten a bad name over the past few years,” Dr. Byrne said. “Of course, viruses can cause some disease. There are millions and millions of viruses around us all the time, and we coexist with those viruses very well.”

She shared a couple of interesting facts. There are 100 times more viruses in our bodies than there are human cells. Additionally, there are 140,000 different kinds of viruses in our healthy guts. “So, there’s lots of viruses out there that are neutral or could even provide some sort of function,” she said.

The type of virus commonly used for gene therapies right now is called adeno-associated virus or AAV. It is a very small, simple virus that seems to be very safe. Another reason it is used is its ability to infect cells in the retina and get to the photoreceptors easily. Once it infects the cell, it delivers its cargo and that cargo is the gene therapy. This therapeutic gene is then stable in the cell as long as the cell does not divide. “That is the reason that gene therapies could potentially be a one and done type of therapy,” Dr. Byrne said. “With a single injection, in theory it could be a cure that could last for the lifetime of a patient.”

With AAV, the lab can actually engineer new viruses. This virus is malleable, so its structure can be changed and so can the types of cells it infects. The Byrne Lab focuses on engineering new viruses with better abilities to target the retina safely and more efficiently.

There are different types of gene therapy approaches that are appropriate for different types or stages of disease. The most common type is gene replacement or replacing the mutated gene with a healthy copy.

Another approach is genome editing. If there is a mutation and a part of the genome is difficult to access or does not code for a protein that has another function in the body, the mutation actually creates a bad protein that is doing something detrimental to the body. In this case, it cannot be replaced with a healthy copy. The mutation has to be dealt with differently. This is where genome editing comes in; it means rewriting the mutation.

When the cells that need to be treated have already died, they cannot be replaced with a healthy copy of the gene. Optogenetics becomes applicable because it creates artificial photoreceptors out of the remaining cells in the retina.

Ophthalmology Department Chair José-Alain Sahel, MD, said the ideal stage for a therapy is when initial symptoms present themselves, such as having difficulty in dark environments. The photoreceptors are still alive yet non-functional. By correcting the gene defect via gene replacement, the disease could be potentially stopped and maybe in some cases, improve cell function.

Dr. Sahel’s group designed a therapy to try to protect the photoreceptors. The goal is to stop a loss of vision, and more importantly, to preserve central vision for reading and face recognition.

The four different targets of optogenetic therapy are: cones, bipolar cells, amacrine cells, and ganglion cells (RGCs). Over 12 years ago, Dr. Sahel’s group found they could reactivate the cones, but this was only relevant for less than 20 percent of patients seen in advanced stages of the disease. So, they decided to focus on reactivating the ganglion cells.

In RP patients, retinal neurons survive years after degeneration of photoreceptors. More than 25 years ago, scientists discovered a type of cellular protein that captures the light and triggers an electrical response at the cell membrane in algae. It induces a response to allow cells to move towards or away from the light.

The first research from several groups, including Dr. Sahel’s, was using the light activated photoswitch protein that exists in nature. But over time, many groups developed modified proteins that are more sensitive to light and easier to use.

Acuity with optogenetics is predicted to be above the legal threshold for blindness.

Called the PIONEER Phase 1/2a study, ChrimsonR (derived from microbial algae) gene therapy is used to target RGCs in end-stage RP. The idea is to transform the remaining RGC nerve cells in the retina into photosensitive cells that can act like the degenerated photoreceptors.

“I feel very fortunate to be involved in this cutting-edge research and this human clinical trial on optogenetics,” Dr. Martel said. He explained how the clinical trial works. Treatment is administered through a single intravitreal injection, one commonly done in ophthalmology.

The goggles are equipped with a camera that detects changes in light intensity in the patient’s surroundings and projects transformed pulses of amber light onto the retina in real time, much like a movie projector onto a theater screen.

Often the team is asked why patients need to wear a special pair of goggles. The basic answer is that an intense, very specific type of light source is required to selectively activate the genetically modified cells in the retina.

This study is in an early phase clinical trial. With dose-escalation, not only do they want to gauge efficacy, but they must determine whether the treatment itself is safe. This is done with subsequent increases in dose of the gene therapy product. At each stage, the safety signals are reassessed to determine whether they are reassuring enough to move to a higher dose.

So far there have been three cohorts of patients at various doses. The last cohort had the highest dose which was deemed to be safe by a data safety monitoring board.

Dr. Martel showed a video of a patient undergoing visual rehabilitation after being treated. The patient was able to locate and grab a pen on the table. Preliminary results and safety signals were encouraging and reassuring.

Another video was shown, this one of a 58-year-old blind patient who was diagnosed with RP 40 years ago. He had light perception when he enrolled in the study. After optogenetic therapy, he partially regained his vision. He could locate and count objects on a table and identify crosswalks in the street.

This patient was given a special type of cap with electrodes that allowed the researchers to correlate some of the visual perceptions occurring in the vision centers of his brain.

“You can see that things are quite exciting,” Dr. Martel said. “It wasn’t that long ago that these types of therapies were deemed in the realm of science fiction. It’s a very exciting time for doctors and patients with some treatment strategies that are promising for vision restoration.”

“We think that there’s promise for partial vision restoration with this therapy,” Dr. Martel said. “The trial is ongoing, and we look forward to the next steps.”

Other enhancements to the trial in the future include:

Dr. Sahel’s team was the first in the world to utilize optogenetics, but now there are many companies competing with them. “We still think that we have a good edge, and competition is healthy and positive for the patients,” Dr. Sahel said. “The most important thing is that at some point, we’ll be able to provide useful vision to patients.”

Join the Eye & Ear Foundation in supporting this research; any gift amount helps.