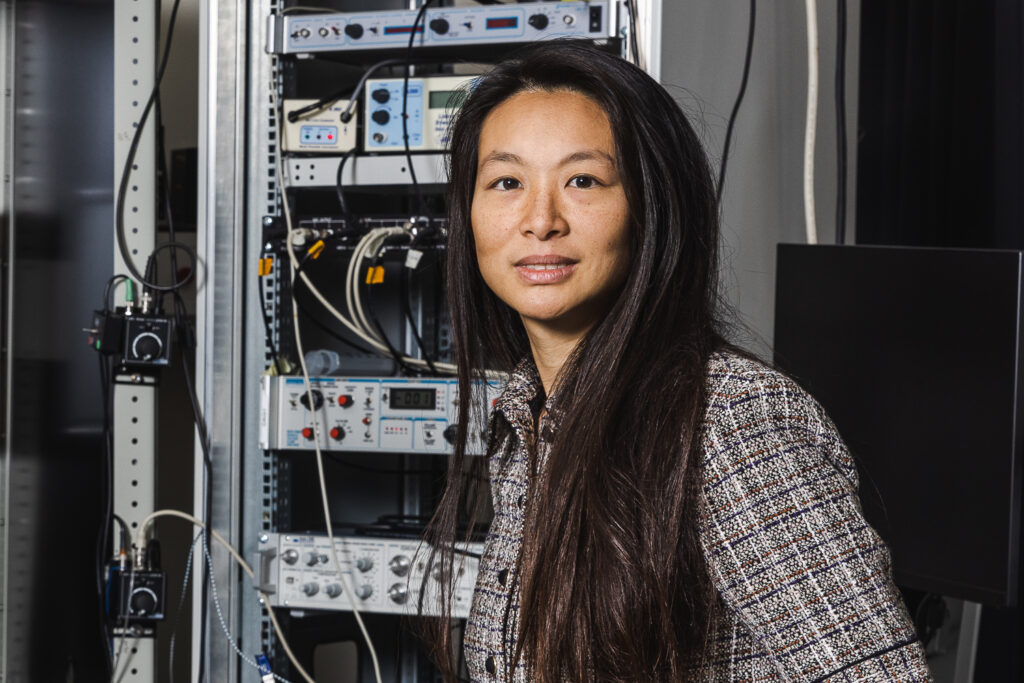 Xing Chen has been a fan of the cutting-edge prosthesis research carried out in Pittsburgh for the past decade or so. The Ophthalmology Department was recently awarded a grant from the Richard King Mellon Foundation to build a focused program on cortical vision, which included opening faculty positions. Chen immediately contacted the Department Chair, José-Alain Sahel, and sent in her application.

The Assistant Professor position was a perfect fit with Chen’s skills and research program. “The university is a trailblazer in translational and fundamental neuroscience research, with a strong non-human primate research community, so coming here was a no-brainer,” she said.

The September move was a big one, as she had been living in the Netherlands since 2014. She did her postdoc with Pieter Roelfsema at the Netherlands Institute for Neuroscience and was promoted to Senior Researcher in 2020. There, she developed 3D modeling and printing techniques to create customized cranial implants to improve implant stability and animal welfare. She also co-developed a 1024-channel prosthesis for recording and electrical stimulation of the cortex.

These technological innovations allowed her to carry out challenging behavioral therapies in monkeys, establishing proof-of-concept for the feasibility of using brain interfaces to generate artificial vision in the blind. Based on these results, she co-founded Phosphoenix, a neurotech startup that aims to develop clinical devices that allow profoundly blind people to regain functional vision.

As Chen explained, decades of work have shown that when you electrically stimulate areas of the brain that are involved in visual processing, you can induce the perception of dots of light, known as phosphenes. These artificial images allow people to recognize objects and people in their environment. To date, these artificial images are very coarse, resembling a small array of light bulbs against a murky background.

“My goal is to better understand how to control the appearance of these images, to imbue them with properties such as color and motion, vastly increase their resolution, and to provide rudimentary but useful vision for people who have lost their sight,” Chen said.

“Thanks to the RKM grant and the support from the EEF, UPMC, Pitt, and the Beckwith Institute, we were able to assemble a strong team of scientists, clinicians, and surgeons around cortical stimulation in the blind at both the science and translational levels,” Dr. Sahel said. “Having Dr. Chen join us is a key milestone in our strategy, aiming at getting these technologies to patients in a safe and efficient approach as soon as possible.”

Chen is thrilled to be in Pittsburgh. She loves the hills, the city’s compactness, different suburbs, friendly people, and her amazing colleagues. As a water sports fanatic, she’s hoping to do some windsurfing and kayaking once she is properly settled.