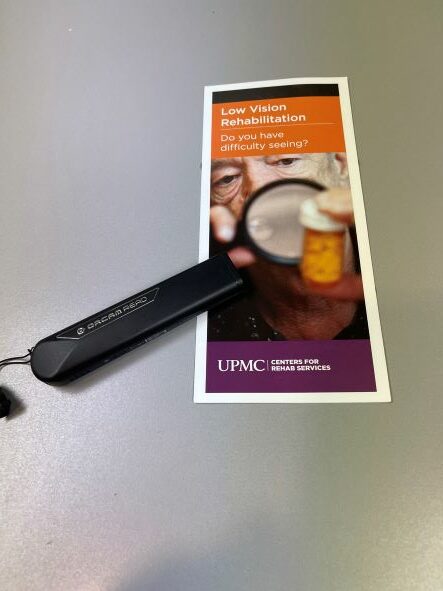 Charlie Booth* has had Peters anomaly since birth; the condition causes low vision. He is now the grateful recipient of low vision equipment via the Eye & Ear Foundation’s grant from the Addison Gibson Foundation.

Booth’s journey started when he received a low vision evaluation from Dr. William Smith, OD, Director, Low Vision Service at the University of Pittsburgh. Based upon Dr. Smith’s evaluation, devices were recommended to assist Booth in managing daily tasks. He was then referred to UPMC’s Rehabilitation Institute’s OT low vision rehab department. Through the low vision OT evaluation and therapy, he used strategies with these devices while using his functional vision.

Booth was able to quickly identify his barriers and current strategies. He was described by Holly Stants, MS, OTR/L, SCLV, CLVT, Occupational Therapy Low Vision Rehab Team Leader, as creative and wanting to be independent to access print – one of his biggest challenges. He told her he wanted to be mainstreamed with technology that everyone else uses rather than being a “standout.”

Booth was introduced to the CCTV and OrCam Read. The CCTV has built-in optical character recognition, so print can be read to him. The OrCam Read is a pen that can be used away from home for print access. He was able to quickly learn and use the equipment due to his skills and motivation.

Once it was determined that these devices met his goals, he was referred to Dana McGinnis-Thomas, UPMC Ophthalmology Manager of Patient Navigation Services. She assisted Booth in completing the grant application process.

“The CCTV makes it much easier to do things like write checks and fill out short forms,” Booth said. “I have been able to resize a metal watch band. I’ve never even attempted that before. The other day I used the OCR feature to read an instruction manual for a new kitchen appliance. It was nice to be able to simply keep flipping the pages and tap a button.”

Booth says the OrCam Read is nice for single page documents, but the CCTV is better for multiple pages. He has used the OrCam Read to read the screen in video games, short letters, food containers, and other miscellaneous items. “It’s so nice to have the ability to quickly and efficiently bring OCR capabilities to almost any situation without the need to grab my phone or other large device,” he said. “The OrCam can go with me almost anywhere.”

Booth estimates he uses these tools a few times a week, sometimes more, sometimes less. He likens them to a flashlight – something he may not use every day but when he needs it, it’s exactly the tool he needs to accomplish the given task. Thanks to these tools, he has a feeling of independence and accomplishment.

Booth has even found more ways to use the devices. He can tilt the CCTV screen, so it faces his computer monitor, which helps him more easily type in things like key codes and product serial numbers for registration. The CCTV also can tilt toward the ceiling at an angle so it can be used while standing.

“This grant has made a huge impact on my life,” he said. “I am so grateful to everyone from the Addison Gibson grant, UPMC Eye Center, and everyone else who had a part in getting this equipment. It was a blessing when I received it and will continue to be a blessing for years to come. I wish I could give everyone involved a big hug.”