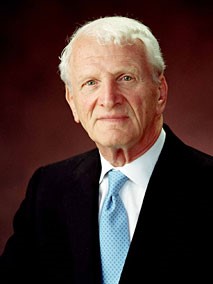 In 1975, Dr. Eugene Myers, now Distinguished Professor Emeritus of Otolaryngology and Emeritus Chair, Department of Otolaryngology, saw a patient who had been referred by a radiation oncologist. She had cancer originating in her hard palate and had endured 17 operations and two courses of radiation therapy. She complained of severe, unrelenting pain that had her contemplating suicide if he couldn’t help her.

Unfortunately, Dr. Myers’ exam revealed residual cancer in several areas. But he had recently read an article by Dr. Alfred Ketchum, a well-known surgical oncologist at the National Institutes of Health, in which he described a new technique called the Cranial Facial Approach. Dr. Myers felt he could do the transfacial portion of the surgery on this patient, but he needed to collaborate with a neurosurgeon who could do the cranial aspect.

“I walked over to the office of Dr. Joseph Maroon, a newly minted neurosurgeon who I had known during his training and whose character, surgical skills, and judgment I admired,” Dr. Myers recalled. Dr. Maroon was a bit surprised when Dr. Myers said he had a patient scheduled for this daring surgery, but he said he was in. The surgery went very well with no complications. The patient lived free of pain and cancer for five years before dying of a second unrelated cancer.  Subsequently, they collaborated in operating upon many similarly afflicted patients with excellent results.

Based on their early success, Dr. Myers led the efforts to establish a Center for Cranial Base Surgery, the first of its kind in North America.  With the recruitment of additional faculty, Pittsburgh rapidly became the destination for such patients from the U.S. and abroad. Over the years, the leadership of the Center for Cranial Base Surgery has changed. Currently, the Co-Directors are Drs. Carl Snyderman, ENT surgeon, and neurosurgeon  Paul Gardner. They have carried out thousands of operations using a minimally  invasive technique, many of which they have pioneered, called endoscopic endonasal surgery They  remove tumors from the brain and the  base of the skull, often times through the nose, without needing external incisions.

The need to continually refine existing techniques, conduct further research in the pathophysiology of these tumors (some quite rare), and train young doctors requires considerable funding, which could be provided from the endowment of a Chair. “This would provide sustainability for this important endeavor,” says Dr. Myers.

To that end, Drs. Maroon and Myers are each making significant contributions and will help raise additional support to establish  “Pioneers in Skull Base Surgery.” To endow a Chair at Pitt/UPMC is $2 million. Once $1 million has been raised, UPMC agreed to match the funds up to $1 million. Fundraising is already underway to reach the total amount so that Dr. Carl Snyderman, who is Professor of Otolaryngology, Neurological Surgery, Bioengineering, and Vice-Chair for Quality & Patient Safety, can officially hold the Chair. There is a new rule that an endowed chair can not be named for an employee until six months after the employee’s retirement. Once Dr. Maroon retires, the Chair will be known as the Eugene N. Myers and Joseph C. Maroon Chair in Skull Base Surgery.

“Dr. Maroon and I are thrilled to lend our names to the establishment of the Eugene N. Myers and Joseph C. Maroon Chair in Skull Base Surgery,” Dr. Myers said. “It means a great deal to us that our pioneering efforts in establishing the University of Pittsburgh as the world’s center for this unique surgery are being recognized in this way.”

Dr. Maroon said he’s doing this to honor Dr. Carl Snyderman, who he called the consummate caregiver, physician, and surgeon, as well as one of the most creative minds in his specialty.

As for the recipient of this honor, Dr. Snyderman recognized Dr. Myers’ leadership and called him a mentor and role model. “With this Chair, I hope to continue his legacy of surgical innovation,” he said.