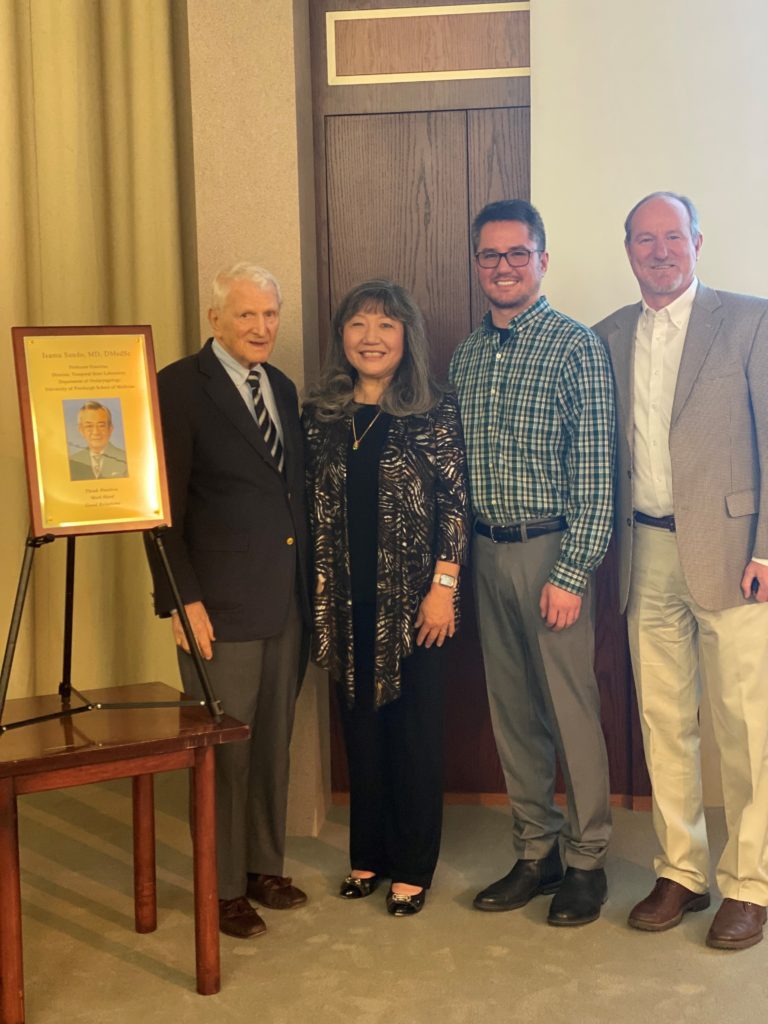 After a hiatus due to COVID, the second Sando Lecture was held on April 11, 2022. Hosted by the Eye & Ear Foundation and the Department of Otolaryngology at the University of Pittsburgh, this year’s lecture featured Akira Ishiyama, Professor of Otolaryngology, Director of Head and Neck Surgery, David Geffen School of Medicine, UCLA. He spoke on temporal bone histopathology following cochlear implantation.

According to his obituary, his “unique ability to describe the microscopic anatomy of the temporal bone in both English and Japanese resulted in a better understanding of many disease processes in the ear and made him a much sought after lecturer throughout the world.”

“Dr. Sando was a key person in our learning the anatomy of the temporal bone,” Dr. Hirsch said. “To do that on your own is just tedious and time consuming. He was able to give lectures and make it interesting; he showed details of the temporal bone histology and pathology.”

Most of the Research Fellows who came from Japan were already faculty members who had trained in clinical work. In addition to learning histopathology, they spent their year with Dr. Sando “learning something which would be more important to them in their career, which was Dr. Sando’s advice: ‘Think positive, work hard, and have good relations,’” Dr. Myers said.

Very few people studied the temporal bone the way Dr. Sando did. Only three centers in this country now focus on it; one of them is UCLA. When Dr. Sando passed, the Department had his slides, books, and talks, but it just wasn’t the same. The desire to commemorate him led to the Sando Memorial Lecture, based on his field of interest and work.

Despite the difficult decision to make this year’s event virtual, it was a success. Dr. Ishiyama presented remotely on a big screen. Fourteen people viewed online, and 45 attended in person; all were able to comment. An informal wine and cheese get together followed. Due to Dr. Sando’s strong following in Japan, many there participated despite the 14-hour time difference. At five am in Japan, they got up to listen and contribute, which “really speaks well of Dr. Sando’s impact,” Dr. Hirsch said.

Dr. Sando’s daughter Mariko —who lives locally — attended the lecture, along with her husband Jack and son Jackson.