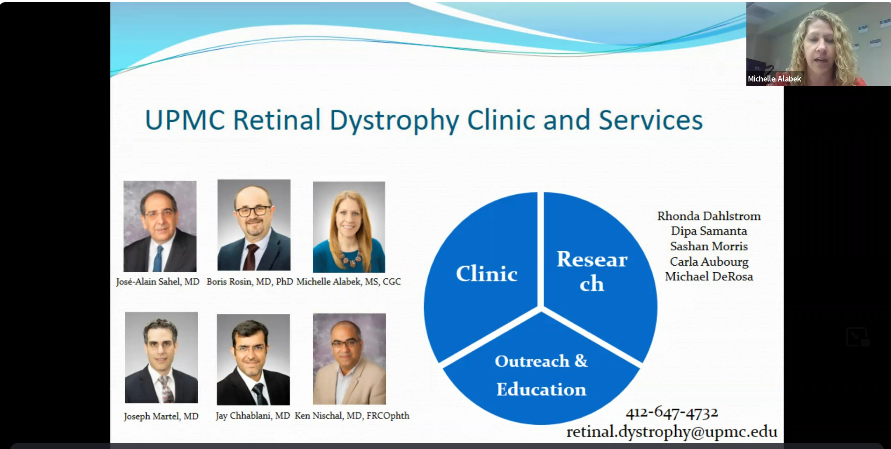 A lot of progress has been made in the past few years on retinal degeneration, Dr. José-Alain Sahel said at the beginning of the Eye & Ear Foundation’s May 18th webinar titled “Retinal Dystrophies: Introduction, Therapies and Ongoing Research.”

Boris Rosin, MD, PhD, Clinical Instructor of Ophthalmology, part of the Retina and Vitreous Service in the UPMC Eye Center, explained hereditary retinal dystrophies and visual function testing. He started by describing the functional cells of the retina. The photoreceptors are divided into cone cells (responsible for sharp color vision) and rod cells (responsible for night vision), which deal with phototransduction. “That is basically taking the light stimulus picture that we see and translating it into a language that the brain understands, which is that of electrical potentials,” Dr. Rosin said.

The process of phototransduction, comprised of multiple protein cascades, illustrates how much can go wrong. A mutation in any of the participants in this and other processes can and indeed does cause an inherited dystrophy, Dr. Rosin said.

The basic building block of phototransduction is the opsin, a protein capable of reacting to light. The different types of opsins determine the spectral properties of the photoreceptor expressing it, namely to which wavelength of light will it react most strongly.

Visual function testing is a wide field comprised of many tests. The most common one is the Electroretinogram (ERG), put forth by a British scientist named Ragnar Granit in the 1930s (He received the Nobel prize in Medicine and Physiology for his efforts in 1967). ERG is performed by applying recording electrodes on the cornea, in fornix, on the canthus, and even the skin. A ground electrode is also usually on the ear. The retina is then stimulated by different types of light, allowing separation of the rod and cone photoreceptors under different stimulus conditions.

Retinitis pigmentosa (RP) is the leading cause of inherited blindness. The incidence of RP is about 1/5000 live births, not including syndromic types (Usher syndrome, Leber’s congenital amaurosis, and others, which include RP and an additional ailment, e.g. Usher syndrome – RP with congenital hearing difficulties of various severity). The incidence of RP together with the syndromic subtypes is about 1/4000 with syndromic types. The total incidence of hereditary retinal dystrophies is about 1/3000. RP is mainly autosomal recessive (AR) inherited, however autosomal dominant (AD), which are usually milder, and X-linked, usually more severe, variants exist.

What happens in patients with advanced RP? The three cardinal signs of RP on physical examination are waxy pallor of the optic nerve, attenuation (thinning and uneven diameter), and deposition of pigment in what is called “bone spicule pattern” due to its resemblance to bone tissue in histological preparations.

Achromatopsia is a rare (about 1:30,000-40,000) retinal disease of cone dysfunction characterized by:

There is a much higher incidence in Israel (about 1:5,000) due to the two religious populations (Chassidic Ashkenazi Jews and Muslim Arabs), which tend to intermarry. The largest known incidence is Pingelap Island (1:10). Oliver Sacks, a famous neurologist and author, wrote a book called The Island of the Colorblind, which talks about this fascinating community.

The retina is an ideal target for gene therapy, because it is a small, confined tissue that is accessible by injection. Clinical and functional follow up is also readily available. In simple terms, gene therapy involves taking a virus, emptying it of its infective component and loading it up with a copy of a gene to be expressed in the target tissue (in this case, the retina). The target tissue is then infected with the virus and starts expressing the gene.

Gene therapy could potentially be used for:

Dr. Rosin shared some gene therapy studies, including ones with canines and sheep. Dr. Sahel’s optogenetics study falls in this category as well.

Stem cells are the ultimate replacement therapy, with human embryonic stem cells (hESCs) a platform for treating retinal disease. The objective is to develop technology that will facilitate the use of hESCs for cell therapy. There are three main target cell types of interest:

Embryos are not needed these days for two main reasons: human embryonic stem cells are mainly derived in the lab. They have an unlimited amount of division potential. Cells can also be taken from a specific patient and induced to revert their cell fate, turning them into stem cells. Cell therapy is lagging behind gene therapy in the treatment of retinal dystrophies due to difficulties in proper integration of newly formed photoreceptors in the pre-existing neuronal circuit. Nevertheless, advances have been made in cell therapy for the replacement of simpler tissues, such as the use of cell therapy for the treatment of dry AMD, where it has shown promise in limiting the extent of atrophy in early-stage clinical trial.

A very hot field is retinal organoids, eye-like structures developing from stem cells in 3D culture media that have staggering applications. Retinal prostheses – both biological and artificial – are also being explored.

A new development in the field of microbiology is CRISPR, which is piggybacking on a mechanism employed by bacteria to correct gene defects caused by viral infections. Dr. Leah Byrne in the Department of Ophthalmology at the University of Pittsburgh employs these and other methods in many ways. Possible uses include:

The second part of the presentation focused on clinical trials. Michelle Alabek, MS, certified genetic counselor, and coordinator of the adult retinal dystrophy clinic started with an overview of general terminology.

Once a genetic cause is identified, this impacts the diagnosis, prognosis, personalized management, treatment options, and risk for relatives. The more trials that are available, the more therapies that are moving forward and progressing, which is becoming increasingly relevant. “Genetic testing is really having more of an impact on deciding and making decisions about options that may be available to patients for new treatments,” Alabek said.

The Foundation Fighting Blindness website highlights all the active trials for retinal dystrophies.

Is a Clinical Trial Right for You?

To assess whether a trial is right for you, talk to your doctor to understand:

An example of a Clinical Trial Timeline

“Everyone, providers and patients alike, would prefer that this timeline is shorter,” Alabek said. Things should not be rushed in a way that jeopardizes patients’ safety. The process is done with a lot of intention and responsibility. There are some efforts, however, to try and expedite some of the progress made in this area. The Monaciano Consortium Symposiums, an international group of clinicians, scientists, and individuals that manage patients with retinal dystrophies are identifying key steps needed to advance treatment.

Another organization working on this kind of collaboration is the Foundation Fighting Blindness, which has the Foundation Fighting Blindness Consortium. Forty participating centers across the U.S. and internationally are working to conduct clinical trials collaboratively to accelerate treatment. Several clinical trials are open, and several others will start later this year.

Resources for Staying Up to Date

How UPMC Identifies Patients for Studies