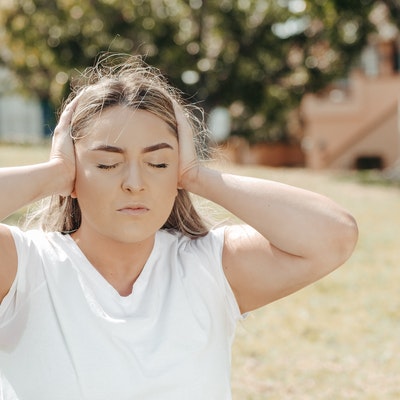 Nearly 50 million Americans have tinnitus. Of those, 99% can be classified as subjective tinnitus, according to the American Tinnitus Association. This is described as when someone hears a sound without an external source.

In the October 7, 2021 Eye & Ear Foundation webinar, “What’s the Buzz? The Neuroscience and Treatment of Tinnitus,” Dr. Philip Perez, MD, Assistant Professor of Neurotology-Otology in the Department of Otolaryngology, University of Pittsburgh, focused on subjective tinnitus. A new addition to the department, Dr. Perez described subjective tinnitus as the kind that is only heard by the patient, as opposed to objective tinnitus, which others can hear and can be caused by changes in blood flow, among other causes. 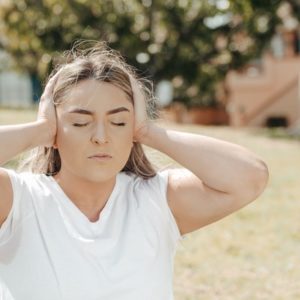 Tinnitus is often described as a ringing in the ears, but Dr. Perez said it might be better to think of it as ringing in the brain. It presents in different ways.

“It’s really an individualized disease and experience for each patient,” Dr. Perez said.

Tinnitus can come on suddenly or be gradual. Its quality can vary broadly. The pattern can be constant, or it can fluctuate. Many people can identify some factors that make it better, and some factors that make it worse. It’s commonly more noticeable in a quieter environment. In terms of loudness, some people can have extremely loud tinnitus that they hear all the time in all sorts of environments, while for others the tinnitus is more in the background. About half of people experience tinnitus at what quantifies as a five-decibel level.

The site can also vary, as the tinnitus can be in one or both ears. Dr. Perez explained that some people describe hearing their tinnitus as originating in the head.

Dr. Perez said there’s some things we know and a lot we don’t. For the majority of cases, an inciting event is hearing loss from any cause. The most common type of hearing loss underlying tinnitus is sensorineural hearing loss — hearing loss caused by damage to the nerves of hearing. However, many other causes can be to blame, including something as simple as wax in the ear blocking off hearing.

What’s really important is what happens after. Dr. Perez said there are definitely changes that occur in the brain and central auditory processing that happens with the sound signal after it is sent from the ear. “A common way to think about this is the brain is used to receiving lots of input from both ears all the time until you take away some of that input, and suddenly the brain is craving that last signal. It then turns up its sensitivity to sound and can begin to create its own sound,” he said. “That’s why we kind of think of the brain as filling in the gap and basically creating some sound that you could think of as ringing in the head, to make up for the lack of input from an ear with decreased hearing.”

Interestingly, even though the vast majority of people with tinnitus have some level of hearing loss, there are also many people who have hearing loss without any tinnitus. There’s no good explanation for this. A focus of research is understanding how the same kind of tinnitus can be different for people; it can alter one person’s life in meaningful ways and be bothersome, while for another it can fade into the background and become part of their new normal. “What other brain circuitry is feeding into this and how that can be altered is a pivotal concept in advancing our understanding and treatment,” Dr. Perez said.

A physical exam includes a careful examination of the ears with a microscope. If someone describes a tinnitus that matches their heartbeat, the doctor will often listen around that area to see if they can pick up on some of those sounds as well. An essential part of the workup includes a hearing test, also called an audiogram, performed by audiologists. The patient’s hearing will be measured in a sound booth to detect both their hearing thresholds and their ability to understand speech – the clarity of hearing.

Most of the time, Dr. Perez said, a history, physical exam, and hearing tests are sufficient to help diagnose people and give treatment recommendations. Occasionally there are other factors that will send them in a different direction. Tinnitus that matches the heartbeat, for example, warrants a further workup with other imaging to look for abnormalities and blood vessels, possibly an underlying tumor. It’s common not to find anything, which is reassuring. When tinnitus is heard exclusively in one ear, that will usually prompt imaging with an MRI.

There’s a massive health burden from tinnitus, because so many people experience it. About 50 million Americans are estimated to have chronic tinnitus, lasting more than six months, according to Dr. Perez. About 12 million have a severe enough case to interfere with their daily activities, so it’s actually disabling.

There are some known risk factors, including:

Unfortunately, there’s no cure for tinnitus. While this can sound disheartening, there are treatment options available to mitigate how it affects people’s lives. Right now, there’s no FDA-approved medications. There’s active research on medications, but it’s not a current recommendation.

One of the mainstays of treatment is counseling and education – explaining what’s known about tinnitus, what’s thought to be underlying it, and being able to rule out the big, bad scary causes. Treatment of the co-morbidities that can make tinnitus worse is essential to improving the patient experience. It’s common to have an involvement of mental health providers to help get some of the other diseases under control and mitigate their effects.

Another mainstay of treatment is something called masking, which is using sounds to help decrease the experience of tinnitus. This can be white noise played, especially at nighttime, to help cover up the sounds of tinnitus and provide a distraction. There are various apps that can provide background noise. A hearing aid can also provide masking.

Behavioral therapy is an additional approach. Dr. Lori Zitelli and our audiology department have an excellent program called Tinnitus Retraining Therapy, which focuses on habituation of the tinnitus experience. It involves hearing aids with background sound played throughout the day. It gets your mind used to hearing that sound so it’s no longer prominent.

Biofeedback and cognitive behavioral therapy are other options that have proven helpful.

“There’s a lot of research to be done to improve our understanding,” Dr. Perez said. “It’s important to know that this is a heterogeneous disease and there are probably lots of things underlying tinnitus. Understanding the different forms of this disease, the different categories, will be helpful for developing a more individualized treatment plan.”

Obviously, if there was a pill that would help with tinnitus, that’d be a huge advancement. There’s research being done on pharmacologic therapies for tinnitus as well as on neurosimulation (simulation through the scalp).

Dr. Thanos Tzounopoulos, PhD, Professor and Vice Chair of Research, Otolaryngology, UPMC Endowed Professor of Auditory Physiology, and Director, Pittsburgh Hearing Research Center, spoke concisely about ongoing research for tinnitus. While we don’t know what tinnitus is mechanically, we’ve made a lot of progress, he said. He talked about parts of the brain outside the auditory system involved with tinnitus, such as emotional centers and memory networks.

There’s a better mechanistic understanding of changes in the auditory system associated with tinnitus. Dr. Tzounopoulos’ lab has found that there’s decreased potassium channel activity that leads to hyperactivity in the brain. They’ve been able to correct this in animal models. While determining safety for human trials, they found some potential toxicity problems. This isn’t a huge problem yet, because now they know what the problems are. They’re continuing with the pre-clinical development and hope to have clinical trials soon with this molecule.

The audience had many good questions. The first one was whether regular cleaning of considerable earwax should be done to avoid tinnitus. Dr. Perez said earwax is one of their favorite causes because it’s easily fixed. Wax is actually healthy for the ears, as it helps with waterproofing and has some antibacterial properties. But if it fully blocks the ear canal, that causes a problem. The vast majority of people don’t need cleanings, but if it’s something suspected, it can be done by your primary care physician or in the ENT clinic.

Someone asked if people with low pain thresholds have a worse time dealing with tinnitus. “It would be difficult to say that every person who has a low pain threshold is more likely to be bothered by tinnitus, but I think that if you were to look at those two groups of people, there would be considerable overlap,” Dr. Perez said.

Tinnitus and diseases like Meniere’s and hyeracusis were discussed. Meniere’s tends to damage the hearing over time, which predisposes people to residual tinnitus. Hyperacusis and tinnitus tend to be seen together frequently as there’s a similar process underlying both.

One person asked whether there was an objective method to diagnose tinnitus. It’s being researched but there’s nothing that’s been proven thus far.

As to whether tinnitus affects the music we hear or the other way around, the doctor said patients tell him their tinnitus affects how they hear music. There are some therapies that involve listening to music to try to change this.

Head, neck trauma, or occipital neuralgia can cause tinnitus, and there are links between migraine and tinnitus.

When PHRC starts clinical trials, there will be a notification list, which will be announced at the website.