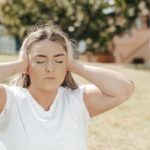 Nearly 50 million Americans have tinnitus. Of those, 99% can be classified as subjective tinnitus, according to the American Tinnitus Association. This is described as when someone hears a sound without an external source. In the October 7, 2021 Eye & Ear Foundation webinar, “What’s the Buzz? The Neuroscience and Treatment of Tinnitus,” Dr. Philip Perez, MD, Assistant Professor of Neurotology-Otology in the Department of Otolaryngology, University of Pittsburgh, focused on subjective tinnitus. A new addition to the department, Dr. Perez described subjective tinnitus as the kind that is only heard by the patient, as opposed to objective tinnitus, which

Sight + Sound Bites Webinar | What’s the Buzz? The Neuroscience and Treatment of Tinnitus 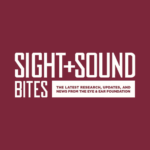 The Eye & Ear Foundation hosted a lunch and learn webinar where Philip Perez, MD and Thanos Tzounopoulos, PhD presented on advancements in tinnitus treatment and research taking place within the Department of Otolaryngology at the University of Pittsburgh School of Medicine. Dr. Tzounopoulos is a Professor and Vice Chair of Research in the Department of Otolaryngology, as well as a UPMC Endowed Professor of Auditory Physiology and the Director of the Pittsburgh Hearing Research Center. He works to understand tinnitus’ underlying cellular and molecular mechanisms and to advance potential treatments and pharmacotherapies for this currently incurable disorder. Dr. Perez

Read More About Sight + Sound Bites Webinar | What’s the Buzz? The Neuroscience and Treatment of Tinnitus ›

The Sound of Progress 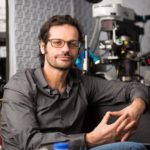 Dr. Thanos Tzounopoulos and his team within the Pittsburgh Hearing Resource Center at the University of Pittsburgh continue to make progress in their quest to develop a pharmacological treatment for tinnitus. Tinnitus is a condition where a person hears ringing, buzzing, chirping, or other sounds in their ears. The noise can be intermittent or continuous, and can vary in loudness. According to the American Tinnitus Association, over 45 million Americans suffer from this disruptive condition. Dr. Tzounopoulos, Professor and Vice Chair of Research in the Department of Otolaryngology, recently published an article in the Journal of the Association for Research

Read More About The Sound of Progress ›

Tinnitus Talk, “a podcast on all things tinnitus,” interviewed Thanos Tzounopoulos, PhD, director of the Pittsburgh Hearing Research Center on his research on developing a drug to treat tinnitus. His work builds on the previously somewhat successful off-label tinnitus drug Retigabine (Trobalt). That drug was taken off the market due to severe side effects. Thanos is now attempting to re-develop it, without the side effects, and better targeted at the source of the neural hyperactivity perceived as tinnitus. In this episode, we speak extensively about Thanos’ theory of how tinnitus is generated in the brain and the role of (broken)

A Window to the Brain: Understanding How What We Hear Influences How We Behave 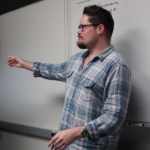 As humans, our senses, such as hearing, influence how we perceive and recognize the world around us. For example, most everyone has experienced the phenomenon of hearing a certain song and instantly being transported to a specific memory of their life. Researchers in the Department of Otolaryngology, however, are now trying to determine how what we hear can also influence how we behave. How Can Hearing Affect Our Behavior? “Our ability to make decisions based on changes in the auditory environment often involves the accumulation of sensory evidence, where newly acquired information is used to update existing beliefs and drive

Read More About A Window to the Brain: Understanding How What We Hear Influences How We Behave ›

Developing a Cure for Tinnitus 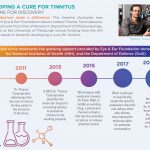 The Eye & Ear Foundation collects support from donors like you to help propel research forward. Whether big or small, our donors’ gifts make a difference in the lives of patients and their families. One of our favorite stories that exemplifies the impact of continuous support in a given area of research is the story of how the Eye & Ear Foundation provided seed funding to Thanos Tzounopoulos, PhD and the team at the University of Pittsburgh which includes Peter Wipf, PhD, Distinguished Professor in the Department of Chemistry. This funding helped to secure larger grants from the National Institutes

Read More About Developing a Cure for Tinnitus ›
Top